Lessons From The Stage: 5 Things Keynote Speaking Taught Me The Hard Way

How many domino moments have you had in your career?

A domino moment is something that starts with a seemingly insignificant happening but in the rear view mirror becomes the starting point for an exponential amount of awesomeness.

I’ve been fortunate enough to stumble into several domino moments in my career but the two that happened in my early 20s were among the most significant.

My first business domino moment happened in college when I replied to the first internship listing I saw on the University of Texas Communications message board after my Mom guilt-tripped me into searching for one my junior year (“Don’t you think you should get an internship at this point?”). I had been lazy and enjoying college a bit too much and my Mom calling me out finally shamed me into action.

I showed up in a full suit to interview with Marika Flatt for an unpaid internship at a local publicity firm. That internship would lead to some of my most cherished friendships and, after extending the internship my junior and senior year, a job offer that allowed Paige and I to get married at 22.

The second domino moment happened a year later at 23 when I was working as a publicist. I was in the middle of a normal workday when an email hit my inbox from another member of our team, Steve Morse. Steve had been pitching a health journal in the Boston area and the physician editor on the other end of the line on that particular phone pitch said she was putting on a CME (continuing medical education) conference on publishing for Harvard Medical School and needed a good book publicist to give the PR talk. She had worked with us a few times and asked if anyone at the firm would be a good fit and, after getting her contact info, Steve sent an email around the office asking if anyone wanted to reach out to her about speaking at the event.

Without thinking about the implications, I picked up the phone and called Dr. Silver. I told her I would be happy to fly to Boston to give the speech and could bring some fresh ideas to the table (left unsaid was that I wouldn’t be bringing a lot of speaking experience). Knowing it would be an issue when I arrived, I also let her know that I was young but knew my stuff. At the time I was 23 and looked like I was 14 years old and  I was praying she didn’t ask me my age because I knew the opportunity would probably be dead in the water. Thankfully, she didn’t and we had a great conversation that led to me heading to Boston as a faculty member at the course in 2005.

A few months later I walked in the banquet room at the Fairmont Copley in Boston and, after getting my name tag from the registration table, I walked up to Dr. Silver to introduce myself. She turned from the person she was speaking with and I said “Hi, I’m Rusty Shelton – it’s great to meet you.” She looked like she had seen a ghost – “Wow! You are WAY younger than I expected.”  I know she was beyond nervous when I hit the stage the next day for my speech. It went reasonably well and I’ve continued to speak at that conference over the past 13 years but that moment started a lane in my career I never expected but I now enjoy immensely – speaking.

13 years and more than 100 speeches later, I have learned many, many lessons the hard way on stage and wanted to share the five biggest keynote speaking lessons from the first quarter of my career:

Speeches are won or lost in the first two minutes on stage. If you win the opening, you have the audience’s attention for the remainder of your time on stage. If you lose, no matter how good the rest of your speech is, they have already mentally checked out.

Solution: Open every speech with an attention grabber that you can deliver in your sleep. The ideal opening is either A) an emotionally powerful or funny narrative or B) a counter-intuitive or surprising situational analysis.

This is a mistake I made quite a bit early in my career. If my slide deck wasn’t working, I happened to insert an incorrect hashtag in a slide or I had a cough, I’d feel compelled to mention it as a nod to what I projected as the audience’s awareness of it.

Your job as a keynote speaker is to deliver awesome content that creates value for the audience and any mistake that a speaker calls attention to (no matter how much it may be bothering that speaker) diverts the audience’s attention to that issue instead of their content. As I mentioned, I made this mistake often early in my career and I see so many speakers do it. Here are a few things I’ve heard speakers say recently:

Solution: Each of the issues above are your problem as the speaker – not the audience’s and in most cases they will never know there was an issue unless you call attention to it. When you do that, you essentially ask them to focus on that issue instead of your content and when that happens everyone loses. Power though at all times with confidence and grit.

Sitting down to watch and listen to yourself speak sounds a bit egotistical right? I certainly thought so early in my career and went out of my way to deliver what I thought was great content and then move on to the next talk.

The first speech of mine that I saw on camera was a talk to the Writers League of Texas when I was about 25. It was a monthly education event and the local access TV station here in Austin decided to come out and film it. My big break! I gave what I thought was a great speech and two weeks later Paige and I sat down on the couch to watch it on a Wednesday night at 9 PM. I’ll never forget the embarrassment I felt as I spent 45 minutes with my hand over my mouth completely horrified at what I was watching (Paige was laughing).

On stage during the speech I was doing something subconsciously – for some reason every time I would make a point I would press down my right hand – fingers fully outstretched – like I was hitting piano keys. I looked like the piano man up there – I must have done it 100 times during a 45-minute speech and I’m sure the audience was losing their minds wondering what the hell I was doing.

I wasn’t consciously doing it but that tick caused the audience to be totally distracted from my message (and probably a bit amused).

Solution: Videotape every speech you can (even if just an iPhone video – these aren’t for distribution) and watch them back to look for A) non-verbal ticks like my Billy Joel impersonation or B) words you’re saying too much (“right?”).

I have never been more nervous in my professional life than right before I hit the stage for that first speech at Harvard. I couldn’t sleep the night before. I was pacing most of the morning. And my hands were shaking a bit from the nerves when she finally said “help me welcome Rusty to the stage” (I’ve never been more thankful for a lavalier microphone because if I had had to hold the mic during that speech it would have been shaking like crazy.)

I’m sure you can think back to your first big opportunity for public speaking and perhaps you were in a similar state. I was only able to somewhat overcome those nerves because I had closed the door to my office and given that speech to the wall every afternoon for a month leading up to the conference.

Solution: If you have a big speech coming up (perhaps it is a larger audience than normal or a major potential client), over-prepare to position yourself for success.

Speaking isn’t about you – it’s about making an impact on the audience you’re speaking to. The more confident you are; the more attention they pay. The more personalized your examples, narratives and statistics are; the more relevant the content is. The more humble and vulnerable you are with your narratives; the more willing the audience is to let down their guard and listen to your insight.

Solution: Although there are a thousand things that go into being a great speaker, when you focus on audience value, everything else tends to fall into place.

I’d be curious to ask the speakers who read this – what additional lessons have you learned? 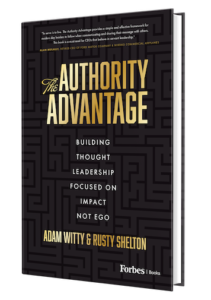